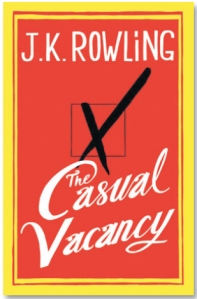 Barry Fairbrother has died suddenly, and so a casual vacancy arises on picturesque Pagford’s Parish Council.

Will it be filled by the son-in-law of the council leader who is desperate for the town to be relieved of a troubled council estate, or will Barry’s friend, who wants to do good to that community, take his place? The homes of the well-to-do in the village are buzzing with plans for power, while the teenage children of these activists follow their own searches for significance. And while their campaigns are waged, lives on the council estate stagger on.

Such is the framework of J.K. Rowling’s long-awaited and faintly praised first novel for adults. The overwhelming view seems to be that it is very ‘dark’, and I was warned against it by some who thought its subject matter would be inappropriate for EN. But here I am writing. I haven’t decided that it is too bleak, though I do want to give a couple of warnings. The first is that the language is coarse and there are also a few scary descriptions of sex. The second is that I think Rowling’s style is poor, with unnecessary similes and peculiar metaphors cluttering what is often great characterisation. This is harder to take at the beginning when the plot is moving very slowly indeed.

A sort of messiah

Like many before her, Rowling uses the novel form to satirise and explore society’s ills. The microcosm of Pagford provides many near-stereotypes for her purpose; the Daily Mail reading nimbys, the abusive father, a well-meaning social worker and a pushy Asian mother among others. None of them are likeable, and it is really the teenage characters who invite more sympathy and carry the story forward to its harrowing conclusion. This is a sour book then, full of a rage at hypocrisy and cruelty, and conscious of the complex causes which bring about social degradation. But what makes this book bleak and not dark is the faith that remains. Barry Fairbrother (name no mistake), who died at the outset of the book, was a sort of messiah. He held the community together. He rescued teenagers from the mire. He was a friend to all. And without him things fell apart. In the Harry Potter series, Rowling displayed echoes of a Christian worldview, and the same is true here. The situation in Pagford is bleak, but its cause is the human heart and the situation can only be changed by a rescuer from outside.

This article was first published in the January 2013 issue of Evangelicals Now. For more news, artciles or reviews, subscribe to EN or contact us for more information.
http://www.e-n.org.uk 0845 225 0057