Here are a handful of news-bites from around the world included in the November issue of EN. May these encourage us as well as spur us on to pray for our brothers and sisters around the world facing severe persecution.

Germany: returned
A family court in Germany decided in mid- September that the children of Christian couple Dirk and Petra Wunderlich can be taken out of state care and returned home to their parents.
They had been taken away in a raid by police and social workers because they were being homeschooled. Christian Concern

Nigeria: free
One of Nigeria’s most senior church leaders, who was kidnapped along with his wife, was freed in mid-September, a week after the kidnapping.
Archbishop Ignatius Kattey and his wife Beatrice were seized near their home. She was abandoned unharmed several hours later. Archbishop Kattey, who is the head of the Anglican Church in the predominantly Christian Niger Delta, was described as being in a stable condition. No ransom was paid. Barnabas Fund

USA: can do
An appeals court in America has ruled that a Christian man can continue to freely distribute Bibles at a gay pride festival, it was reported in mid-September.
A previous ruling from a lower court was reversed, and now Brian Johnson has the freedom to hand out Bibles at the Twin Cities Pride Fest in Minneapolis, as he had been doing for more than a decade. The Christian Institute

For more news and prayer fuel from around the world, subscribe to EN for monthly updates.

Today, October 15, I attended a meeting of the Church of England Evangelical Council (CEEC). And very challenging it was, too.
Founded in 1960, the Council draws together representatives from various evangelical bodies, the evangelical theological colleges and area representatives from the diocesan fellowships. At least, that is what it used to do, and that is still the theory today. Unfortunately, the reality is somewhat different, since the Council increasingly reflects the divisions — and indeed weaknesses — of Anglican evangelicalism.
When I became a Christian, back in the early 1970s, evangelicals in the Church of England instinctively sought one another’s company. When you moved to a new diocese, you sought out, and were sought out by, the diocesan evangelical fellowship. Anglican evangelicals not only knew what they stood for, they knew what other evangelical Anglicans stood for.
What a change from today (and I do mean literally ‘today’) when the divisions and ill-feeling among evangelicals would surely amaze their forebears. Much blame was being laid at the feet of the CEEC itself by some of those present, but we can hardly expect a council of evangelicals to exceed the qualities of the constituency from which they are drawn. And a quick trawl round the internet and blogosphere will reveal an atmosphere of tetchiness, mistrust and ill feeling.

Different ‘badges’
Sometimes this has found expression in explicit doctrinal disputes. Tom Wright’s musings on justification have been seized on by some evangelicals as not just a way to understand the economy of God, but as a badge to distinguish themselves from other evangelicals. The same seems to be true of the ‘penal’ element of substitutionary atonement, which is also now regarded as optional by some in the constituency.
The problem in these disputes is that, under the guise of reading Scripture more closely or refusing to be bound by traditions of the past, new ‘positions’ become a rod with which to beat those maintaining the old. The arguments quickly descend from differences of doctrine to the ad hominem, where the person holding the doctrine is treated as inferior in ability or imagination (this has certainly happened to me). And, in such an atmosphere, godly dialogue becomes almost impossible.
Personally, I feel the problem is still partly the result of the inherent poverty of the Anglican evangelical theological tradition in England. Recently I asked for the names of contemporary Anglican evangelical theologians (as distinct from students of biblical studies or historians) so as to invite one to a conference. The lack of response was telling. Evangelical Anglicans are strong on handling the Bible, but they have long been weak on putting together ideas. And, in the end, evangelicalism is an ‘idea’.

A theological core
Many years ago, the venerable Anglican leader, Harry Sutton, said to me that the revival of evangelicalism in this country would require a theological core, and a theological college at its core. This was before I spent a year at Moore College in Sydney, Australia, and I did not quite appreciate what he meant.
Having been there, and having reflected on my own past training and the present evangelical reality, I understand what he meant. Our divisions are not a matter of ‘rich variety’ but poor comprehension of God’s truth. The best thing we could do right now is declare a period of repentance. After that, we might be able to rebuild not just the CEEC but Anglican evangelicalism. And the result would be good not just for that constituency but for the kingdom.

Here are a handful of news-bites from around the UK included in the November issue of EN. May these spur us on to pray for our country and issues we all are facing.

BBC: bias?
In mid September Dr. Peter Saunders, the campaign director of Care Not Killing, lodged a complaint against the BBC after Lord Falconer appeared on BBC One’s Breakfast programme on September 18 and discussed his plans to reform the law on assisted dying ‘without challenge’.
Dr. Saunders was due to appear alongside Lord Falconer to argue against euthanasia but was told a few hours beforehand that his presence was no longer necessary. Right to Life Charitable Trust

RE: Oftrack
Ofsted, the schools inspectorate, has found that a third of primary school children had an ‘inadequate’ understanding of Christianity, it was reported in October.
Inspectors, who visited 185 secondary schools and more than 30 primary schools, said teachers were fearful of ‘saying the wrong thing’ and that few children were being taught to get to grips with religion. Religion Today

Bible: out of court
Magistrates will, in October, debate scrapping the religious oath for witnesses and defendants in court, but critics have raised fears that the move could further erode the Christian heritage of Britain.
Instead, all those giving evidence in court would make a secular pledge, which it is thought would make it fairer and more relevant for people and help them understand the importance of what they are saying. The Daily Telegraph

For more news and prayer fuel from around the UK, subscribe to EN for monthly updates.

In these early months of the 2013/14 Premier League season, anti-Semitism has reared its ugly head.
The Football Association has warned fans that anyone caught chanting the word ‘Yid’ could face criminal charges. This anti-Semitic term has been aimed at the fans of Tottenham Hotspurs due to Tottenham’s large Jewish population and Spurs fans in reaction have begun to sing ‘Yid Army’ as a form of identity. In recent weeks a video was posted on YouTube showing West Ham supporters singing anti-Semitic chants at their October match against Spurs.

Close to the wind
Racism has no place in any civilised society and certainly has no place in God’s church, which calls people from every nation, tribe and tongue to know the love of God in Christ.
However, it seems that some Christian groups which take an anti-state of Israel stance either sail very close to the wind or may at times tumble over into what amounts to be anti-Semitism. This year’s Greenbelt festival saw the launch of ‘Kairos Britain: Time for Action’. This is a new, avowedly pro-Palestianian, Christian organisation. Their website says that they seek a just and lasting peace in the region based on the realisation of full human and political rights for all and calls for an end to oppression and injustice. So far, so good. But when you read their understanding of the situation in Palestine you find a pretty one-sided view of what has gone on. There is no mention of rocket attacks on Israel from Hamas. There is no mention of Palestinian suicide bombings on buses with Israel. I am certainly not someone who thinks that the state of Israel is above criticism, but this is unbalanced.
It would clearly be unfair to equate criticism of the state of Israel with anti-Semitism. However, in supporting various Muslim groups in the Middle East, such a Christian organisation may well be giving support, perhaps inadvertently, to those who hate Jews per se. One only has to think of some of the extreme statements of ex-President Ahmedinajad of Iran to realise that such people do exist.
Nick Gray, director of Christian Middle East Watch, which takes a different view from that of Kairos Britain, warns of a disturbing imbalance. He says: ‘In November 2012, Christian Aid held a conference in Gateshead on “Peace and Justice in the Holy Land”. A non-Christian commentator, Denis McEoin, who is an expert on Middle East affairs, wrote a detailed account of the proceedings (1). He says: “The conference was, from beginning to end, a total travesty of those ideals (of peace and justice); it was in all respects one-sided, often dangerously so. One after another, the speakers all presented the pro-Palestinian narrative and arguments derived from Palestinian political theory. Not once was an Israeli or Jewish narrative even mentioned… yet Israel was on several occasions ridiculed and condemned”’.

Jerusalem above
With anti-Semitism finding public expression in the Premier League, Christians need to be very careful not to be understood to be aligned with it. In our politically correct environment, in which those who can paint themselves as the most victimised are always assumed to be in the right, God’s word calls us to be more discerning (Exodus 23.2,3). May God grant true peace in the Middle East. Meanwhile the Jerusalem that is above is free and those in Christ belong to that heavenly city. 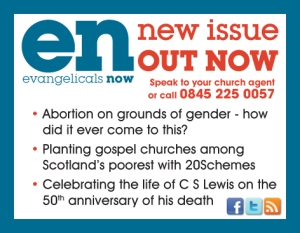 A few highlights to look forward to in the November issue of EN! It’s scheduled to arrive from the printers on Friday October 25. Of course you can always e-mail subs@e-n.org.uk as well if you’d like a complimentary copy or if you’d like to subscribe!