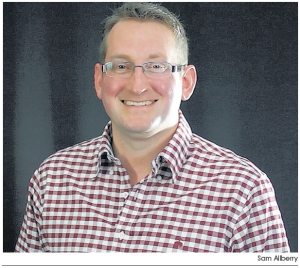 I was in my final weeks of high school. Exams were coming to an end and we were all looking forward to the prospect of a long, study-free summer. It had been a hectic final few months. A couple of uncomfortable home truths were sinking in. The first was that it is quite hard to prepare for exams when you haven’t paid much attention in class. Revising is much harder when you haven’t done much ‘vising’.

The other home truth was even more uncomfortable. I had always been someone who formed close friendships, but I was now beginning to realise there was something a bit more than that going on. Though I’d had a couple of girlfriends, I’d never felt the same kind of bond as I had with one or two of my close male friends. As the long summer began and there was less going on to distract me, the truth began to bite. The words began to form in my mind: I think I’m gay.

It was during this same period that I got to know some Christians for the first time. I was working Saturday afternoons in a local Christian-run coffee shop, and this was the first time I’d ever really got to know Christians my own age. They became fast friends and when, after exams were over and I had nothing else to do, they invited me to their church youth group, I decided to go along. I liked these guys and was interested to know more about what they believed. The message of Jesus, it turned out, was quite different to what I had imagined.

The message I heard

After John was put in prison, Jesus went into Galilee, proclaiming the good news of God. ‘The time has come’, he said. ‘The kingdom of God has come near. Repent and believe the good news!’ (Mark 1.14-15).

Jesus says the kingdom of God has come near. Whatever God had planned to do to put right the wrongs of this world, right then was when he was doing it. It was all about to kick off.

And the response Jesus looks for is repentance and faith. When Jesus burst onto the scene, he didn’t subdivide humanity into categories and give each one a separate message. One for the introverts, another for the extroverts. One (with logical charts and bullet points) for left-brain types, and one (with different colours and ambient music) for the right-brain folk.

God’s message for gay people is the same as his message for everyone. Repent and believe. It is the same invitation to find fullness of life in God, the same offer of forgiveness and deep, wonderful, life-changing love.

It was this message I first heard at my friends’ church, the message I have tried to live in the light of in the years since. Through it all, as someone who lives with homosexuality, I have found biblical Christianity to be a wonderful source of comfort and joy. God’s word to me on this issue at times feels confusing and difficult. But it is nevertheless deeply and profoundly good. The gospel of Jesus is wonderful news for someone who experiences same-sex attraction.

I used the term ‘same-sex attraction’ just then because an immediate challenge is how I describe myself. In Western culture today the obvious term for someone with homosexual feelings is ‘gay’. But in my experience this often refers to far more than someone’s sexual orientation. It has come to describe an identity and a lifestyle.

When someone says they’re gay, or for that matter lesbian or bisexual, they normally mean that, as well as being attracted to someone of the same gender, their sexual preference is one of the fundamental ways in which they see themselves. And it’s for this reason that I tend to avoid using the term. It sounds clunky to describe myself as ‘someone who experiences same-sex attraction’. But describing myself like this is a way for me to recognise that the kind of sexual attractions I experience are not fundamental to my identity. They are part of what I feel but are not who I am in a fundamental sense. I am far more than my sexuality.

So I prefer to talk in terms of being someone who experiences homosexual feelings, or same-sex attraction (SSA for short).

And, as someone in this situation, what Jesus calls me to do is exactly what he calls anyone to do: ‘Then he called the crowd to him along with his disciples and said: “Whoever wants to be my disciple must deny themselves and take up their cross and follow me”’ (Mark 8.34).

It is the same for us all — ‘whoever’. I am to deny myself, take up my cross and follow him. Every Christian is called to costly sacrifice. Denying yourself does not mean tweaking your behaviour here and there. It is saying ‘No’ to your deepest sense of who you are, for the sake of Christ.

Ever since I have been open about my own experiences of homosexuality, a number of Christians have said something like this: ‘The gospel must be harder for you than it is for me’, as though I have more to give up than they do. But the fact is that the gospel demands everything of all of us. If someone thinks the gospel has somehow slotted into their life quite easily, without causing any major adjustments to their lifestyle or aspirations, it is likely that they have not really started following Jesus at all.

And just as the cost is the same for all of us, so too are the blessings: ‘Come to me, all who are weary and burdened, and I will give you rest’ (Matthew 11.28).

Is God anti-gay? No.

But he is against who all of us are by nature, as those living apart from him and for ourselves. He’s anti that guy, whatever that guys looks like in each of our lives. But because he is bigger than us, better than us, and able to do these things in ways we would struggle to, God loves that guy too. Loves him enough to carry his burden, take his place, clean him up, make him whole, and unite him for ever to himself.

This article is an edited extract from Is God Anti-Gay?, published by the Good Book Company. It is part of the Questions Christians Ask series. Available fromhttp://www.thegoodbook.co.uk and Christian book shops (ISBN: 978 1 908 762 313, £3.99).

You can watch ‘An Interview with Sam Allberry’ here

Sam Allberry comes from Sevenoaks in Kent. He studied theology at Wycliffe Hall, Oxford, and has since worked at St. Ebbe’s Church, Oxford, and now serves at a church in Maidenhead. Hobbies include reading, watching The West Wing and anything to do with South-East Asia.

(This article was first published in the September 2013 issue of Evangelicals Now. For more news, artciles or reviews, subscribe to EN or contact us for more information.
http://www.e-n.org.uk 0845 225 0057)