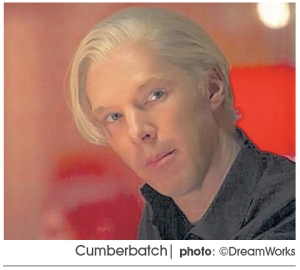 Whatever your opinion on Julian Assange, whatever your thoughts on the rights and wrongs of leaking information, whatever you feel about the truth behind this particular take on WikiLeaks, this was a thought-provoking film, despite being panned by most reviewers.

Julian Assange is well documented as not liking the source material upon which this film is based, and one can see why. His character, played spectacularly by man of the moment Benedict Cumberbatch, is shown as flawed, egotistical and frankly a little disturbing and unpredictable. He is portrayed as holding so much back, emotionally, which leaves one expecting him to explode at any moment. Putting opinions about Assange aside, the leaks are the most uncomfortable watch of this film.

Can governments be trusted now?

Violent attacks on the innocent, corrupt governments, a web of secrets so wide and deep: these were part of the Cold War, and certainly the actions of the ‘enemy’, weren’t they? What this film does, flawed though it may be — and certainly having one, maybe two, rather ‘cheesy’ endings, is question the level of trust one should have in a supposedly benevolent government. Assange may not like the film, but it will provoke discussion on truth, the revelation of lies, the responsibility of revealing the truth and feeble attempts to ‘cover up’ wrongdoing.

So, on the walk back to the car, discussion turned to the ultimate revelation of truth, and the individual’s feeble attempt to cover up actions of which we are not proud. And how on that Final Day: every lie will be revealed; every sin counted; every government called to account; every bad and good action, and the motivation for it, exposed. Who’s ready for that?

This article was first published in the December 2013 issue of Evangelicals Now. For more news, artciles or reviews, subscribe to EN or contact us for more information.
http://www.e-n.org.uk 0845 225 0057