Brussels is the centre of the European Union around which the debate about Britain’s membership is raging.

The plant team for Brussels

God has his people in that city and a new church plant began recently. Naomi Pilgrem takes up the story. ‘Why do we need another church? Our church is small and there aren’t enough of us as it is!’

The person asking that question was genuine and servant-hearted and this was their gut reaction to hearing that we were planning, under God, to leave the church we had been members of for five years in order to plant a new one in a neighbouring borough of Brussels.

In many ways, such a reaction is understandable. The church in Belgium is weak, the ground is hard, trained Bible teachers are few, finances are very limited and evangelicals make up a negligible percentage of the overall population. So the desire to bunker down and try and solidify what is in existence is in many ways legitimate and necessary.

And yet, over the course of history, we see again and again that our sovereign God chooses to use that which is weak to accomplish his glorious purposes. And when we think that we know the Bread of Life and that two miles down the road, in the next borough, there are 50,000 people dying of spiritual hunger without access to a Francophone church where the gospel is clearly proclaimed…(to read more click here)

This article was first published in the April issue of Evangelicals Now. For more news, articles or reviews, visit us online or subscribe to en for monthly updates.

It was this challenge that occupied the thoughts and prayers of working Christians and members of St Peter’s Barge as they met to hear Rico Tice explain the vision for ‘Questions of Life’ (www.questionsoflife.org.uk). This outreach aims to give everyone in the Wharf a chance to engage with the gospel – specifically through a week of talks arranged for 14-20 March.

Mark Greene has written: ‘Changes in work and transport patterns mean the people we spend most of the time with often don’t live near the church. Many of our strongest contacts are at work.’ This is why opportunities like ‘Questions of Life’ are so vital.

This year, events will be hosted by firms including KPMG, Barclays, the Financial Conduct Authority, Shell as well as St Peter’s Barge – London’s only floating church. Evangelist Rico Tic, a senior minister at All Souls Langham Place, is the main speaker. He will speak on topics including ‘Why bother with religion?’ and ‘What is reality?’

Other speakers are Christians drawn from the business and political world. They include Jeremy Anderson, chairman of Global Financial Services at KPMG, David Burrowes MP and David Gascoigne, head of Power and Utilities at KPMG. Others will share testimonies about God’s work in their lives – Yvonne Edwards, a Wharf worker, whose life descended into alcoholism and rehab, will share about coming to faith in Jesus and having her life turned around.

‘Questions of Life’ builds on an initiative last year called ‘Festival of Thought’, which sought venues within Canary Wharf firms to provide lively lunchtime talks using a team from The Oxford Centre for Christian Apologetics. Following an encouraging response and the opportunities of being able to host such events inside company offices, ‘Questions of Life’ aims to follow on.

As the mission was launched with Christians in January, Rico challenged those gathered on the Barge to…(to read more click here)

This article was first published in the March issue of Evangelicals Now. For more news, artciles or reviews, visit us online or subscribe to en for monthly updates. 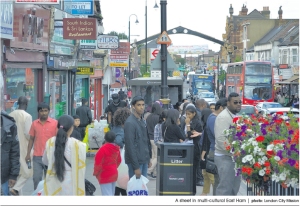 In 1800, 2% of the world’s population lived in cities.
By 1900 that figure was 12%. Today 52% of us are city dwellers and by 2050 it is estimated that will rise to 70%.
God is passionate about his world. He cries ‘Mine’ over every square inch of it. Consequently, God is passionate about cities, since they have more of the image of God per square inch than any other place on earth.

Cities matter to God
Cities are packed full of the fallen image bearers of God; they bring together the nations of the world around ideas and commerce; they are unique places of cultural and political formation; and they have a disproportional national and global influence far beyond their boundaries.
In an increasingly urban, mobile and digital age, cities provide unique opportunities for the gospel and are strategic for reaching the world for Christ. The apostle Paul knew this; he poured himself into establishing churches in the most influential cities of his time. If Paul were alive today he would surely be crossing the globe from New York to Beijing to London, planting, growing and encouraging city churches.

London matters to God
London is one of the most connected, diverse and influential cities on the planet.
Heathrow is the world’s busiest international airport and the hub of the civil aviation world. Our capital city is consistently ranked the most visited city in the world — driven by education, business and tourism. According to 2011 census data, its citizens speak over 300 languages, with 55% identifying themselves as other than white British. They are not only cosmopolitan, but overwhelmingly young, with 31% under 24 years old. London knows exceptional wealth and also deep deprivation. It is home to 43 universities and, according to a recent official evaluation, the cultural programme of the Olympic and Paralympic games cemented London’s reputation as a world leader in the arts.

Gateway to the nations
London provides unique challenges, but, by the same token, is an open door to reach Britain and a gateway to the nations.
In days past, missionaries travelled to the four corners of the planet to reach the nations; today the world has come to our capital. It is as if God has picked up his world and, like a snow globe, shaken it and jumbled up the nations. As they settled, a concentration of people from many different nations landed within a 12-mile radius of central London and there are numerous mission organisations actively evangelising them.
The apostle Paul was aware of the powerful witness afforded by people from different ethnic and social groups united in the gospel (Ephesians 3.10). London churches enjoy this same opportunity today.
And yet, according to Tim Keller and others, the church still has relatively little sustained presence in cities like London. To a great extent this is explained by large student populations, a global workforce and the high cost of housing (which means young families tend to gravitate away from city centres), all leading to transitory congregations. Yet the sheer pace of urbanisation, with London’s population likely to grow by one million (or 12.5%) in the next ten years, only serves to underline the importance of a strategy across the evangelical fraternity to plant and rejuvenate churches in London, a strategy that by reaching London will reach the nations.

engageLondon
Against this backdrop, it is therefore timely that London City Mission is coming together this summer with the London Institute of Contemporary Christianity and others to put on engageLondon, a Christian festival which aims to connect the gospel with London living, mission and culture.
Ken Brownell who is helping to organise the festival, says: ‘My dream for engageLondon is three days of serious but enjoyable engagement with the gospel in the context of London so that people are better equipped to live faithfully as disciples of Jesus in the world’.
The event, sponsored by the Fellowship of Independent Evangelical Churches, runs from August 29-31.

This article was first published in the July 2013 issue of Evangelicals Now. For more news, artciles or reviews, subscribe to EN or contact us for more information.
http://www.e-n.org.uk 0845 225 0057